Sorry I hazzent posted in a while. I’ve been making noo friends! Rite now, I have two noo friends who have exceptional storees.

First is Bobbi. She was ‘tacked by a bobcat twice and then spent teh night sleepin’ in a snowbank in teh extreme cold. She’s only a kitten and is a sweetheart. And I fink she’s bootiful. Look: 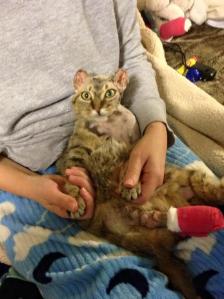 Yoo can read moar about her here:

Next is Emerson Michael.

From his FB page: “Emerson came into the Houlton Humane Society in early August 2014. The woman who brought him in claimed she “snapped” his neck because he was annoying to her. It was very apparent after seeing him, that he had some major damage from the abuse he had endured. After a vet visit, we learned he had a broken neck that healed wrong due to no medical care, spinal cord damage from being kicked or some sort of trauma to his back. He also had broken ribs and 3 of his feet were burned.”

He is nuffing short of pawsome. Look:

You can read more about him here:

I just wanna give so much lubs to these two kittehs. They have loving homes now and get lotsa lubs, but I wanna curl up next to them and purr to halp heal and comfort them. I know dat, for certain, I am a better cat for getting to know them.